About
vastufy brings the ancient science of Vastu into your home and onto your phone, for you to create a healing, healthy space, where you feel calm and happy.

Vastu (meaning dwelling) is a traditional Indian system of architecture for buildings and uses principles to rectify energy imbalances, by offering guidelines for arranging objects and furnishings within them. Much in the same way as Feng Shui looks to create balance with the natural world in interior spaces.

Vastu consciously divides up our homes into zones that represent different aspects of our lives - relationships, finance, success, career, happiness and health, and can highlight areas we are energetically neglecting.

It focuses on aligning with the laws of nature, welcoming in energy from the Sun and honoring the five elements: earth, air, space, fire and water, whilst adhering to the fundamental directions of North, East, South and West.

Vastu’s goal is to create harmony between people and their environments and to manage energy within a space. Rooms, furniture, objects and appliances are situated to correspond with and maximize the respective elements and their particular benefits for existing and planned buildings.

Within minutes the vastufy app will give you a ‘score’ for your property based on the placement/direction of each of your rooms, according to Vastu principles.

If the design or use of your space is not in accordance with the principles outlined in Vastu, it can result in a flaw or an imperfection and can negatively impact the quality of life, which lowers your score.

Practical remedies then guide you, so you can improve and increase your Vastu score and to harness the maximum potential of natural energies and combat the flaws. By making a few simple adjustments we can transform our homes into deeply sacred spaces that offer us positivity, support and wellbeing.

The remedies work at a subtle subconscious level and work towards creating harmony and balance in all areas of life to keep our physical, mental and emotional energies as clear and as free-flowing as possible.

You can check your own property as well as vastufy the properties of your friends and family, and your businesses too.

Use vastufy to: vastufy helps you to live in a space that harnesses the natural positive energies available to us from nature.
About Vastu
Vastu is an ancient Indian Vedic science of architecture that outlines principles for design and construction of buildings.

It aims at harnessing higher energy levels from the space we love or work in, to create harmony within the bodies of its occupants.

Vastu can bring about a positive change in all aspects of life, from finance to relationships, our career to our mental health. If the design or use of a space is not in accordance with the principles outlined in Vastu, it can result in a flaw or a defect called Vastu Dosha or imperfection and can negatively impact the quality of life.

Simple changes in your property can enhance and negate positive and negative energies accordingly, without breaking down any walls or moving bathrooms and kitchens.

The most essential role in Vastu is played by the eight directions (North, North-East, North West, East, South, South-East, South-West, West). In ancient times the directions were determined by using the shadow of the Sun, in modern times we use a magnetic compass, which is inbuilt in the vastufy app.

Vastu balances the five elements (earth, air, space, fire and water) in all the directions of your property, exploiting the positive solar energy from the East and the magnetic energy from the North to its full potential.

Each element is associated with a direction and each direction is associated with a planet, giving it certain positive and negative characteristics and respective effects on the human body. Our body is also made of these five elements (‘Panchbhoota’ or ‘Panchtatva’) and as human beings we are affected by these elements – this is the basis of Ayurveda.

As per astrology, in Vastu, each direction is assigned a Lord which gives every direction unique characteristics and makes it suitable for certain activities or purposes and unfit for some.

Astrology, Ayurveda and Vastu go hand in hand. In Ayurveda we balance the five elements in our body to lead a happy and healthy life. Astrology gives the basis of how we interact with different energies based on our birth chart. In Vastu we balance these elements and energies in our environment to maximize positive results in our life. 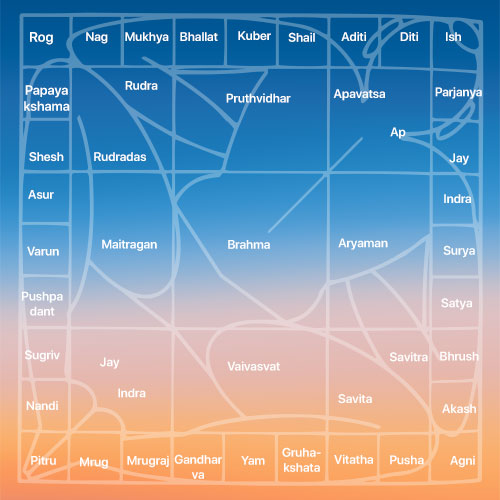 About Vastupurush & Vastupurush Mandala
Vastupurush is the deity of land and buildings and is depicted lying face down with his head in the North-East and legs in the South-West of any space. 45 divine beings reside in the body of Vastupurush, who supervise different sections of our property, and the science of Vastu is based on guidelines, design principles and planning to keep these energies and the overriding Vastupurush happy.

Vastu focuses on organizing buildings based on a grid called the Vastupurush Mandala, a geometric chart that incorporates the Vastapurush. It symbolically represents the cosmos and constitutes the mathematical and diagrammatic basis for generating design.
The Story Behind Vastupurush:
Lord Shiva, one of the supreme beings who creates, protects and transforms the universe, fought against a giant named Andhak for many years and at last killed him. During the fight, from the sweat of Lord Shiva a powerful man was created. This powerful man started destroying everything in his way, including the Gods, and in the end gained possession of the three worlds.

All the gods went to Lord Brahma, the creative principle of the universe, for help to save the world. This person had become so big and powerful that no God could overpower him. Finally, Lord Brahma instructed 32 gods to hold his peripheral body and 12 gods to hold his interior body and pinned him down in the earth with his head in the North-East and legs in the South-West. During this, Lord Brahma jumped into the center and held him down. A total of 45 gods including Lord Brahma reside on the Vastupurush.

Finally, he apologized to Lord Brahma. Lord Brahma accepted his apology and blessed him, saying that although he will be kept pinned down by the Gods forever, people will start worshiping him and will build their houses as per his wishes and those who build their homes as per his rules will prosper and flourish. Thus, all the positive and negative effects caused by these 45 gods are considered in Vastu.